Ok Europe \ What Kind Of Europe For Work And Rights?
Paris, November 4 2021 \ Report 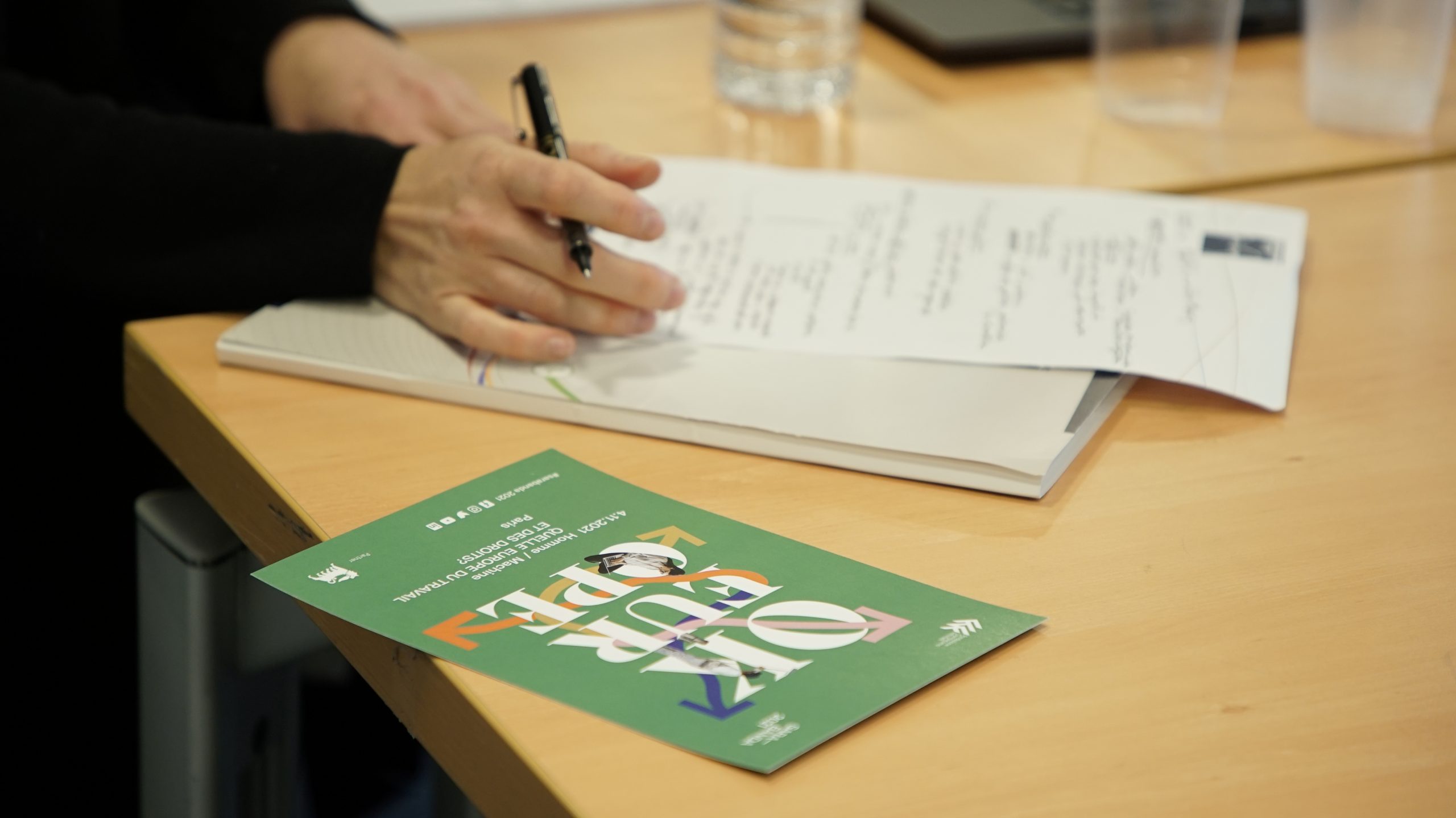 Ok Europe \ What Kind Of Europe For Work And Rights?
Paris, November 4 2021 \ Report

The second workshop for “Ok Europe: People/Machine – What Kind Of Europe For Work And Rights?” was held in Paris, on November 4th 2021. The present webpage aims to summarise the main outcomes of the wokshop and public conference. Before that, we already made a step into the “Paris jungle” finding about the illegal recruitment of riders with the investigation of Danilo Ceccarelli.

The purpose of the event, which is part of a wider cycle of conferences, was to address the issue of digitalisation, and the socio-economic consequences of the digital transition on European labour markets. Gathering experts on this topic from different academic and professional backgrounds, including stakeholders from civil society, private sector and insitutions, the goal was to adopt a well-rounded perspective. In particular, the initative aimed at addressing problems and challenges that are faced by European citizens from different communities and socio-demographic groups.

Which Europe for labor markets?

The keynote speech of the event was provided by Professor Joseph Stiglitz, who addressed the social, economic and political challenges brought by the increasing spread of digital technologies. As a matter of fact, the rising adoption of AI and other smart solutions in workplaces entails a new set of challenges for workers, adding up to other burdensome crises faced by citizens, such as the climate and migration emergencies.

As western economies are transitioning from a manufacturing industry to a primarily service industry, an increasing number of jobs are being automatized. The consequences for workers are severe, as such automatization entails a reduction of certain jobs, and the creation of new, more precarious ones, as in the case of platform work. Furthermore, in many cases, the availability of advanced technologies is deteriorating working conditions, as such technologies allow levels and types of surveillance that were not previously conceivable. Importantly, these dynamics affect both skilled and unskilled roles. Such scenario creates a fierce competition among workers, resulting in an increase in corporations’ power, which, in turn, causes salaries to lower and weakens workers’ unionization. In light of these processes, workplace digitalization’s main risk is to increase inequality.These transformations in contemporary societies and labor markets raise a key question on the future of westerneconomies:

how can States fully protect workers and unions, while still preserving innovation and growth?

The keynote speech was followed by a debate among key experts and stakeholders. In the debate, many issues and considerations were raised. The paragraphs below summarize the main topics addressed during the collective discussion.

Reproductive labor and the need for a revalorization of work

As digitalization becomes increasingly widespread in many professions, western societies face a growing labor segmentation. In fact, under the current economic system, productive and reproductive labor are extremely polarized. On the one hand, in most cases highly skilled workers operating in the service industry benefit from good working conditions and financial compensations. On the other hand, workers who perform reproductive labor (such as teachers, nannies, etc.), often face harsh working conditions and low salaries. The Covid-19 pandemic has exposed the crucial role of care labor (which has often been defined as ‘essential work’). Yet, public praises were rarely followed by an increase in salaries.

Such polarization sheds light on the issue of work’s value, and how value is attributed both socially and economically.

Workers’ compensations and the role of minimum wage

With the rising inflation and the cost of living rapidly increasing in most countries, the issue of compensation becomes crucial for the majority of workers. A promising initiative in this respect comes from the European Commission, which has recently proposed a Directiveon Minimum Wages (currently being discussed by the co-legislators).

This proposal has been received negatively by a number of opposing countries (including Italy), maintaining namely that a national minimum wage would decrease unions’ power in participating in collective bargaining. Nonetheless, the available literature on wage distribution and union participation suggests that the Minimum Wage Directive represents a promising policy intervention, which could improve the work of many European citizens.

Telework and the associated governance challenges

The surge of the Covid-19 pandemic has caused a rapid acceleration in the adoption of telework, both within the private and the public sector. The role of technology in driving this shift has been widely recognized, as the new remote forms of work have been technically made possible by a variety of online tools, such as teleconferencing software, project management programs and sector-specific solutions. However, the link between telework and the concept of work beyond the realm of employment has been much less explored in the public arena.

Telework, in fact, calls into question the very definition of work, and how such definition can be adapted to the contemporary economy.

The concept of work has been traditionally conflated with the idea of employment, whereby a specific spatial and temporal dimension set the boundaries of the professional sphere. It is important to notice, however, that technological advancement is reshaping work dynamics, blurring the lines between personal and professional times and spaces. This phenomenon has been exacerbated by the increase in telework, but it has been observed in other forms of work, such as digital labor and gig work. Addressing the scope of work outside the realm of formal employment is necessary in order to formulate appropriate policy responses.

One of the main consequences of the rapid advancement of digital technologies, is the need to readjust education and to tailor it to the digitalized economy. More specifically, educational programs at all levels need to integrate digital tools as part of their strategy, as well as to strengthen STEM subjects. This objective, however, is challenging on many levels. First, with respect to high school education, teachers themselves would need to undergo specific training to learn how to properly develop lectures on and with new technologies. This alone would be a lengthy and costly process.

As concerns university education, bachelor and master’s degrees should provide more training on new technologies, and particularly the associated skills that are more relevant in the job market (such as data analytics, big data, and programming).

A promising solution to integrate these skills into more university programs could come from a collaboration with private companies, and the creation of more executive courses and joint research centers between public institutions and private companies. Finally, in the next years the issue of upskilling workers already in the market will become even more pressing, bring new challenges. These challenges include the strategies that companies will adopt to manage these processes, with the risk of companies just replacing workers with younger jobseekers entering the market. Companies, as well as workers, will also need to learn how to blend ‘traditional’ skills with the more recent digital skills.

The case of an Ecological Transition Income (ETI) was evoked as a best practice to jointly tackle workers’ economic precarity and the climate crisis. As opposed to the Universal Basic Income (UBI), ETI acknowledges the limited nature of natural resources, and addresses climate change by accelerating the ecological transition.

Practically, it does so by setting some elements of conditionality to the cash transfer:

Moreover, ETI would include a rethinking of traditional employment centers. Instead, within this mode, people would truly have the opportunity to choose the field they would like to work in or the type of business they want to start. Job seekers’ profiles would then be matched with the demand of activities of a specific community.

The community-led approach that characterizes ETI can also be found in the case of cooperatives, and, more specifically, platform corporativism. Platform cooperatives are online platforms that are cooperatively owned and governed following democratic principles. Created as an alternative to venture capital-funded platforms, platform cooperatives aim to provide their ownership and governance to the most vulnerable groups – that is, workers users, and other relevant stakeholders. In most cases, the services provided by platform cooperatives are comparable to the services offered by mainstream online platforms, including food delivery services, short-term renting providers, as well as music streaming services. Such approach, thus, combines the integration of digital technologies in the labor market, with the protection of workers’ and citizens’ rights, and the improvements of their living and working conditions.

The initiative “OK Europe: People/Machine – What Kind of Europe for Work and Rights?”, brought to light a number of key challenges associated with digitalization and its consequences on work and workers’ social protection.

The most pressing challenges that need to be addressed by political stakeholders and policymakers include conceptualizing the value of reproductive work, setting a European minimum wage, tackling the governance difficulties brought by telework, as well as rethinking secondary and tertiary education programs.

In order to successfully intervene on these issues, welfare systems, non-profit organizations and private companies need to adapt to the fast-evolving digital economy and to reconsider the very pillars on which the current the contemporary economic system is based. In this respect, the cases of Ecological Transition Income and Platform Corporativism represent relevant examples and possible starting points.