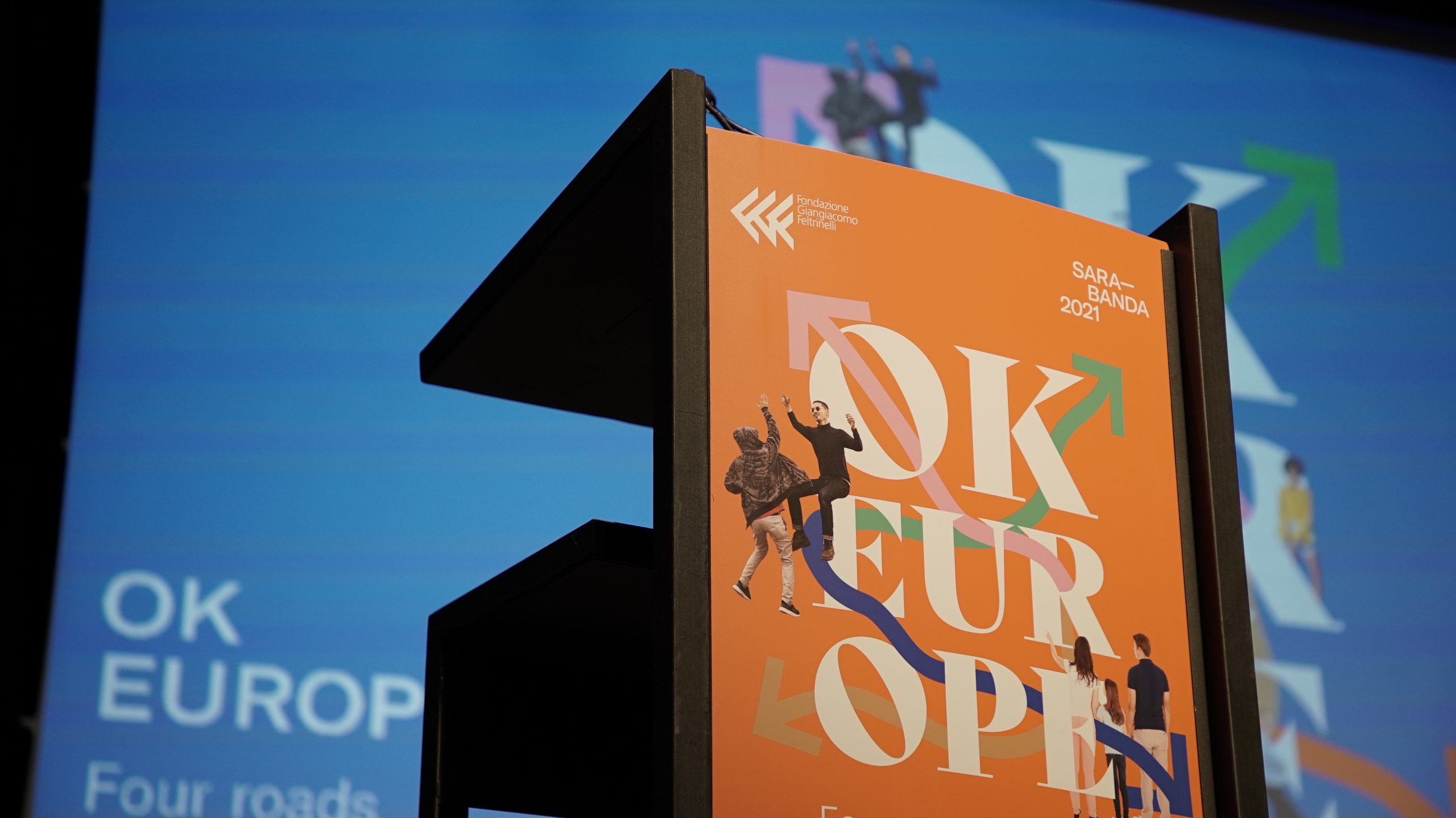 The first OK Europe! workshop, which took place in Barcelona,  and was organized in collaboration with the Institute of Government and Public Policy (IGOP) of the Autonomous University of Barcelona, focused on the topic of urban development. It has gathered 18 participants among academics, policy-makers, activists and planners, to discuss best practices and solutions, and to propose policy recommendations in relation to two main urgencies of cities: guaranteeing the right to housing and fostering territorial cohesion. Our trip to Barcellona started with the investigation of Elena Ledda. The workshop was opened by the keynote speech of the urban sociologist Professor. Saskia Sassen who has stressed the forefront role of cities in tackling global governance challenges.

In other words, cities are at the forefront of major governance challenges, as mentioned by Prof. Sassen’s words were widely shared by the participants’ workshop. However, they also pointed out several limitations of cities in addressing emerging challenges.

These limitations are related to four dimensions: scale, power, resources and time.

Many of the priorities that cities have to address overspill their administrative boundaries. Participants pointed out that social and territorial segregation in Barcelona does not unfold only between neighbourhoods of the city, but between cities of the Barcelona Metropolitan Area. The same applies to housing: forms of expulsion due to gentrification/touristification processes do not only run between neighbourhoods, but between cities, being Barcelona the one that often expels its less well-off inhabitants to surrounding cities. In other words, many of the most pressing challenges must be considered and tackled as metropolitan-scale challenges rather than city-scale ones but the institutional architecture is often not designed to do so.Moreover, all participants agreed that cities have limited powers and resources to deal with major priorities, although with due variations according to each national context. Guaranteeing the right to housing is a striking example of both power and resource limitations. For instance, local governments do not have the power to regulate most of the legal aspects that affect the housing question (rental law, mortgage law, insurance law, etc.) whose regulatory power falls in the hand of the national or regional governments, at least in the Spanish context; nor do they have the economic resources to fulfil impelling housing needs, such as financial resources to subsidise rents or undertake major social housing (re)development projects.

Let’s listen to Marisol Garcìa on the social and territorial cohesion of Barcelona.

Finally, many of these challenges are structural components of the urban fabric that need long-term strategies, plans and solutions, in order to be effectively tackled. The increasingly dramatic housing crisis or the deepening territorial inequalities cannot be tackled within the time limits of a government mandate that, depending on the context, can vary from four to six years (four in the case of Spanish cities).

All agreed that the procedures of election and voting established in our representative democratic systems are an essential component to ensure a vibrant and pluralist democracy. However, electoral cycles sometimes make it difficult to implement actions and policies with some sort of coherence beyond these time limits.

However, cities are also places for social innovation, institutional experimentation, political participation and multi-actor collaboration that can allow them to overcome such limitations. Over the last year, the city of Barcelona has been very active in finding innovative political solutions to address its major challenges. Workshop participants had the opportunity to present and discuss successful cases, projects and plans that could inspire political action in other European municipalities.

In relation to housing, different measures were brought to the table by participants to illustrate how the Barcelona City Council is dealing with the housing crisis that has hit the Catalan city with impressive waves of housing evictions and expulsion that have affected the most vulnerable (migrants, elderly, young). Among these measures is worth mentioning the political commitment of the City Council in increasing the social rental housing stock of the city (which is currently 1.5% of the total housing stock).

In order to do so, the City Council has approved an ambitious housing plan – the Right to Housing Plan – that envisages a fourfold increase in the public housing stock by the end of 2025. Such a massive increase is carried out partially by the City Council itself, through the financial support of both private and public financial actors (such as the European Investment Bank), and partially indirectly by both private developers and housing cooperatives. Secondly, in order to further increase this stock, the City Council has approved a regulation that obliged real estate developers to dedicate 30% of the housing stock to affordable housing when new developments or comprehensive rehabilitation take place.This measure allows the City Council to gain public housing stock within the existing social fabric of the city.

These are only some of the measures that the City Council is taking to guarantee the right to housing and participants agreed that more measures could be taken, such as establishing new taxation to finance social housing developments or fiscal incentives to private owners who wish to rent their property at an affordable price. However, all participants agreed that, as mentioned by the general director of the Barcelona Housing Department, Javier Buron, there is no single measure to solve the housing question that government can implement but a series of policies have to be adopted, and a series of collaborations and partnership with both civil society and private actors have to be established, in order to effectively tackle the housing crisis.

Let’s listen to Javier Buron on housing and rehabilitation.

In relation to the social and territorial cohesion, Barcelona can count on an important instrument through which is tackling territorial inequalities. Since 2016 the Barcelona City Council has implemented a policy called the Neighbourhood Plans with the specific objective to address this issue through a cross-sectoral and a participative approach. In the last four years, 150 millions Euro have been invested in the 16 most deprived neighbourhoods of the city (Barcelona has a total of 73 neighbourhoods), which include approximately 12% of the city population. The plans do not focus on one specific dimension of intervention but implement a variety of measures in relation to different policy domains, such as health, education, housing rehabilitation, public facilities and spaces. Of particular relevance is the fact that such measures not only are defined and designed through a participatory approach to policy-making but it also adopts a co-production approach as some of the measures are implemented either through the support or by community-organisations themselves.

The cases and projects mentioned by workshop participants are particularly relevant in showing us how local governments can act in the face of challenges such as housing and territorial inequalities. However, these examples also show us how this capacity for intervention can be strongly enhanced through forms of collaborative governance that directly and indirectly include a multiplicity of urban actors and governamental scales.

Moreover, the Barcelona City Council often deals with private actors. Workshop participants have mentioned that, City Council collaborates with private owners to provide affordable rentals to citizens (what is called “Borsa de lloguers”) creating a link between the rental supply and demand where the city council appears as the intermediary. Also, a key actor in the Catalan housing ecosystem is Fundació Habitat, a private social rental housing manager led by third sector organizations as well as local public administrations, including the Barcelona City Council. This foundation is in charge of housing provision and renovation and, by the end of 2020, it managed and renewed 619 housing units. Finally, local governments also have limited capacity to acquire public land and often have to negotiate and collaborate with private bodies, such as banks and real estate companies to overcome the land shortage.

Furthermore, participants agreed on the important role that newly established social actors have played. In relation to housing, they were referring, for example, to the PAH (Platform for People Affected by Mortgages) and the Sindicat de Llogateres (Tenants Union). They have been key in building social and political consensus in order to approve key housing policy at the local level that were opposed by opposition parties (the above mentioned law about the 30% of the housing stock). Moreover they have been important in order to seek to overcome the power limits of the city government. Together with established social actors, such as Neighbourhood Associations, ODESC, etc, they joined forces with the Barcelona City Council to successfully lobby the Catalan government to put a cap on rental prices with the adoption of a new law called “Llei de Contenció i Moderació del Preu del Lloguer (11/2020)” .

From the social and territorial cohesion perspective, workshop participants have pointed out that the collaboration among adjacent municipalities is essential since the continuity of the urban fabric (and problems) does not match the institutional discontinuity and fragmentation.

Therefore, public-public partnerships are key. In the Barcelona context, there are examples of metropolitan-scale public entities that manage common services at the metropolitan level, such as mobility or waste management (i.e the Area Metropolitana de Barcelona or Entitat Metropolitana del Transporte). Public-public projects have also been deployed to address social issues. This is the case of “Agenda Besos” where several municipalities with some of the most deprived neighbourhoods of the metropolitan area decided to design and work together on a common agenda to address inequalities in such neighbourhoods.

Finally, as mentioned in th

Let’s listen to Maria Sisternas participation and dialogue between planners and citizens.

Recommendations and priorities of actions

There was a consensus among participants in regards of the following 4 main ideas: